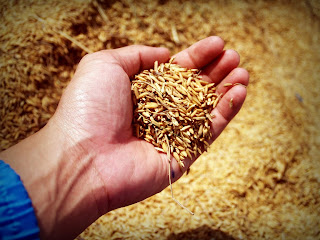 Once seen as a key differentiation between better and mass marketed beer, the 2-row barley malt
may now be the least important ingredient in a brewery.  Malt has disappeared from our beer conversations.  There are still palettes stacked high with 50 lb bags, and fork lifts. By weight, it's still beer's second largest ingredient, after water of course.  However it's lost our attention, and its contributions intentionally minimized to better showcase on the other players - most typically hops and Yeast (or other microflora).

The mighty hop has always been a lead character in American craft beer.  There's something in our soil that makes hops express pungent aromas and aggressive flavors.  European brewers traditionally considered these hops too vulgar to feature prominently in a beer's finish.  They kept quiet about cost savings from the use of american hops to bitter.  American craft brewers found ways to feature these piney, resinous flavors as virtues and birthed the American Pale ale and American IPA.  Hops make american beer American.  Many of our best stouts, porters followed suit.  Locally produced knock-offs of continental styles don't excite the market, quite like interpretations of those styles boasting abundant lupines.  The secret to success in most of these beers was to compliment the hop flavor with a rich background of caramel, bread, or cereal flavors from malted barley.   Now it seems as though hops have stabbed their partner in the back.  Today, hop flavors blend with themselves.

Just as the word "balance" has become unusually cliche in beer writing, the concept of marrying hop and malt flavors has been discarded in favor brewing liquid hop candy.  New varietals offer a broad palette of fruit flavors and aromas.  They show very well in a light beer with some non-ferment-able sugar.   It's exciting to feature the hops, and tone down almost every other flavor.  This follows naturally from a successful, if nerdy habit of craft brewers.

For years it has been quite common to see a draft list including a beer that is some number into a long series of single-hop IPAs.  These beers allowed discerning drinkers, and presumably the brewing staff, to learn a bit about new varieties in a well controlled experiment.  There was a featured hop variety, added to an remarkably simple malt bill.

Personally, I struggle to ordering these.  My curiosity is balanced by my diminished expectations for the beer as a whole.  A one-off single hopped beer is rarely the best, or even 3rd best beer on a draft list.  This isn't to say that a single hopped beer must be lackluster.  Bell's two hearted ale is single hopped with centennials, and is simply one of the greats.  I just don't think that the highly complimentary malt bill was an accident, or one that would make as great of a beer with a different varietal.  Something would clash.  There's too much flavor.  Something needs to go to make a great, and easily re purposed grain bill to show case different single hops, or hop blends.  It's not the water, or the yeast, although some strains play better than others.   The cloud candy New England IPA further dismisses the malt character, and showcases more than one hop.   Welcome to the era of completely flavor neutral malt flavors.

Tap rooms can offer a full board of pale beers using essentially a single mixture of grain and sugars, adjusting to scale ABV.  The creative control involves varying hop blends to craft a variety of beers.  It's a simple playbook, and it works in a number of places.

The cool innovation is that brewers like Portland ME's Austin Street., are starting to play more with water chemistry to make beers of distinction while still appearing to fall into the New England IPA category.  I enjoyed their Patina over the weekend.  It had a wonderful finish reminiscent of a great cask bitter, or even some great Czech lagers.  I don't think anyone has cracked the riddle of marketing various brewing salts as a feature.  Maybe it's best to simply identify them as a key aspect of great beer design.  It's a slippery slope leading straight to chemistry class.

Marketable flavors come from microbes in a much easier to understand way.  Good yeast makes good beer.  Good bacteria can make good beer.  Microbes that play well with each other can, over time, make some spectacular beer.   It's a conversation about proportion and relies as much on mysticism as science.  Or maybe playing a lot of pink floyd in the barrel room.

Sour beers as a concept aren't new.  American craft brewers have long looked at Belgium and its wild beers for inspiration.  It feels like every summer they enjoy a bit of a renaissance and claim more of the market once reserved for lack-luster American wheat ales.  A quickly soured beer is best with a simple grain bill.  Longer term aged beers can benefit from grain complexity and variety, but most of the grain character is chewed up by the various microbes before the beer is served.  The malt bill design paces fermentation by different species.  While the barley has a part to play, it is unseen by the consumer.

Of the four main beer ingredients, Jack D'Or is no longer a hero.  He's an also ran.  The mighty hop is King.  Yeast and water contribute flavors that excite.  American craft beer has left malt behind.  It will be a few years before it returns to prominence.  The local malting trend is supporting some quirky beers reminiscent of brewpub single-hopped beers from about 7 years ago.  The quirks of the grain are obvious, however there's no harmony in the grain.  I'll look to the resurgence of lager, and the the locavores to restore malt to it's rightful glory.

By Unknown June 04, 2018
June is a busy month with graduations, the coming of summer, and the wind down of the school year.  Fathers day always seems to come out of no where.  No worries.  Here are some ideas for the last minute father's day shopper. Beer Tour Beer tourism is a real and growing business segment.  Your city probably has one or two operators guiding minibus loads of attendees to typically 3-4 craft beer destinations.   It's a great way to sample a lot of new beers, and meet like minded folks.  Operators are a quick google away.  Consider companies like  Boston City Brew Tours ,  The New Hampshire Beer Bus , Portland OR's  BeerVana ,  The Chicago Beer Experience ,  Indy Brew Bus,  the Evan Rail designed  Eating in Prague Czech Craft Beer Tour , and even a  Napa Valley Hop Train .  Books I read a lot in the summer.  If your dad does too, here are some books he may enjoy. Barrel-Aged Stout and Selling Out: Goose Island, Anheuser-Busch, and How Craft Beer Became Big Business   b
2 comments
Read more