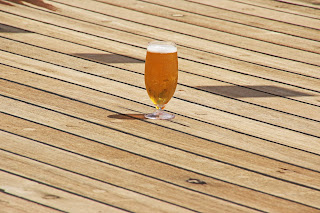 I'm not envious of the youngsters starting out in an era when good beer is available on every street corner.   Yes, things have never been more exciting in US Micro brewing but I feel the grip of  nostalgia.  New breweries are opening almost weekly.  New taprooms draw crowds to taste new, photogenic beers.  Novelty, at times, seems to surpass quality in importance to today's promiscuous drinkers.  Which isn't to say that we didn't get around in my day.  It's just that we didn't make such an effort to make an obvious trail, or tally our conquests.  Which were, admittedly, somewhat smaller in number.

So many brewing luminaries of my youth are now ancient.  Great Lakes Brewing is 30.  Bells is older.  Cambridge Brewing Co turned 29.  These companies made the products that turned me into a beer lover, and excited me to learn about new styles.  It didn't matter if they brewed according to obscure traditions, or off the wall experiments.  I loved the innovation, and the experience of discovery.  I didn't wait in line to taste something I heard was supposed to be awesome.  I tried these beers out on my own, or at beer dinners free from expectation.

Now everything is cross marketing, to quote Ani DiFranco.  Instagram.  Untapped.  Twitter.  Message boards.  Chatter perpetuates demand.  Controversy promotes conversation, even if it's contrived.  There's no bad press in an age of hype.  It's simply difficult to seem interesting talking about old stand byes, no matter how great they are.

Who wants to hear about the joys of Dortmunder Gold, Tow Hearted, or even Benevolence?  They've probably heard it all before.  Maybe it's all been said.  I'm not sure it matters if there's some sort of berry frappe IPA on tap in Chelsea.  It's easier to feed the PR machine than to generate insight.

Maybe I'm the curmudgeon enjoying a beer I drank in college, or grad school.  Or perhaps the company keep.  I like the new stuff too, but that doesn't render the classics moldy oldies.  (Unless they are supposed to have some sort of pellicle).  Old Breweries are doing some interesting things.  Let's talk about that.

For less than the price of a 4 pack of a double dry hoped IPA, one can enjoy a mixed variety pack of 12 beers from a regional or national craft powerhouse.  These are perfect for parties.  And don't necessarily boor to tears anymore.  They kill the on-premises competition on price, and convienence too.

New Belgium has released a 12 pack designed for blending.  Mix your mixed pack.   Fulton Beer has a mixed pack of barrel aged beers. Breweries don't need to be geeky, and promote behaviors that might seem anti social at a barbecue.     They simply need to downplay the "gateway beers" and include the brewer's best.  The pack should showcase the brewery's innovation and quality.  This isn't to say skip the pilsner, or any specific style.  Just skip the half hearted attempts to check boxes in a 1990s approach to diversity.  By all means include 3 of the flagship beer.  Let the rest beer weird, or at least nostalgic, but definitely not lame.  Help customers fill a cooler with remarkable beers without asking them to take a costly road trip to a cannery in out of the way places with names like Canton, Charlton, or Waterbury.

The advice is simple.  Design a product for the target market, not the cranky BMC drinker along for the ride.  The customer knows what those guests wants and has a solution to provide it at grocery store prices, or in cans with a trendy neon owl logo.

The era of craft beer evangelism has past. 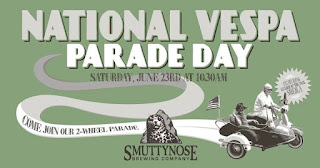 Smuttynose has gotten some bad press recently for, well, going belly-up.  Now they have scheduled the most smutty* event ever.  A Vespa parade along New Hampshire's sizable seacoast.  It's silly, funny, and visibly ties to the brewery's heritage of airstream trailers, flannel shirts, and distinctive hats.  Isn't that a great conversation starter?

The new generation of breweries have started holding their own brew fests.  Nothing is stopping the big breweries from doing the same.  I bet the old guard has some interesting kegs in kept in their cellars for key accounts, and geeky beer fests.  I'm sure plenty of beer geeks would make a trip to the old home place if they knew to expect some rare vintages and interesting debuts.

Older breweries don't have to stop doing the cool things that built their business.  Sam Adams has hit a high water mark in innovation and flavor with it's Spirit of '76 - a mass market blended beer.  An astonishing concept in 21st century America.  They mix lager and ale, brewed in-vogue strains of fruity hops.  It's innovative in construction, flavorful, and still appropriate for the Fenway Park bleachers.  To keep going with sports analogies, I'd like to question the audience.  Can anyone think of a line-up - in any sport that played at a consistently high level for more than a couple years without major changes?  Why would breweries expect to maintain consistent favorites for a decade? It might be time to bench some vets, and give the rookies a shot.

*Assume this word relates to beer, smiling seals and a small island off the coast of New Hampshire.  It is not intended to be interpreted in any way that could be applied to the legacy of Betty Page.

By Unknown June 04, 2018
June is a busy month with graduations, the coming of summer, and the wind down of the school year.  Fathers day always seems to come out of no where.  No worries.  Here are some ideas for the last minute father's day shopper. Beer Tour Beer tourism is a real and growing business segment.  Your city probably has one or two operators guiding minibus loads of attendees to typically 3-4 craft beer destinations.   It's a great way to sample a lot of new beers, and meet like minded folks.  Operators are a quick google away.  Consider companies like  Boston City Brew Tours ,  The New Hampshire Beer Bus , Portland OR's  BeerVana ,  The Chicago Beer Experience ,  Indy Brew Bus,  the Evan Rail designed  Eating in Prague Czech Craft Beer Tour , and even a  Napa Valley Hop Train .  Books I read a lot in the summer.  If your dad does too, here are some books he may enjoy. Barrel-Aged Stout and Selling Out: Goose Island, Anheuser-Busch, and How Craft Beer Became Big Business   b
2 comments
Read more